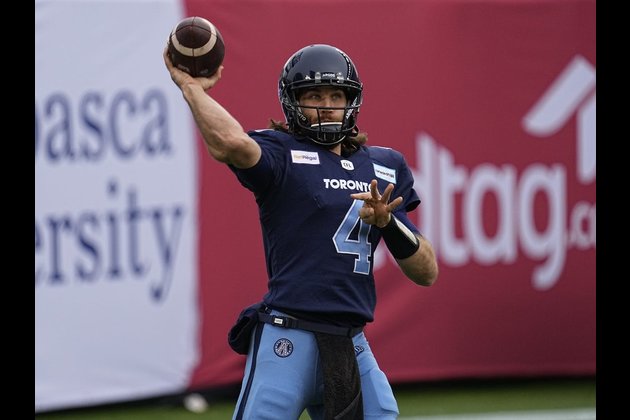 The CFL's East Division isn't what one would call elite. The Toronto Argonauts currently lead it at 3-3, with the Hamilton Tiger-Cats second at 2-5.

There could be some sort of resolution coming to this sort of race by Labor Day. Toronto and Hamilton meet four times over the next month, with the first matchup taking place Saturday night in Toronto.

The Argos are limping into this clash after a 23-13 home loss Sunday to previously winless Ottawa. They didn't score in the second half, generating no running game and failing to consistently provide a clean pocket for McLeod Bethel-Thompson.

While Bethel-Thompson threw for 340 yards and a first-half touchdown, it wasn't enough to prevent an embarrassing setback.

Toronto coach Ryan Dinwiddie has an idea of what his team has to do this week.

It wouldn't be a surprise if the Argos tried to establish running back Andrew Harris early. The 35-year old Harris is still one of the best backs in the CFL, as borne out by a 111-yard effort on July 4 against unbeaten Winnipeg. But he had just 17 yards last week.

Meanwhile, the Ticats registered a 24-17 win on July 28 over Montreal in their most recent game, reaping rewards from going to a two-quarterback system. Dane Evans played 29 snaps and went 13 of 18 for 206 yards and a touchdown, while Matthew Shiltz was in for 15 plays, hitting 7 of 10 passes for 44 yards and rushing for a team-high 42 yards.

"A win's a win," Evans said. "We were rolling a little bit. I honestly feel it's the way we can play all the time. There's no magic speech; you just have to go and do it. And we did it in the third quarter."

That's when Hamilton rattled off a pair of touchdowns, turning a 10-6 lead into a 24-6 cushion that held up through a fourth-quarter rally by the Alouettes.