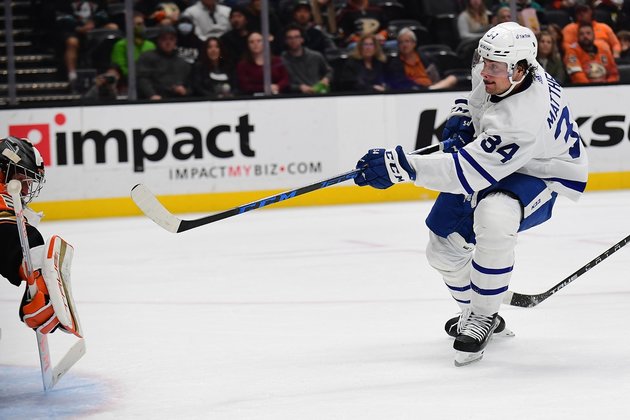 Michael Bunting, Alex Kerfoot and William Nylander all collected one goal and one assist as the Toronto Maple Leafs matched a franchise record with their seventh consecutive road win by beating the Anaheim Ducks 5-1 on Sunday.

Auston Matthews and Wayne Simmonds also scored, while goaltender Jack Campbell made 38 saves for the Maple Leafs, who swept a California road trip for only third time in franchise history.

After a scoreless first period, in which Campbell made 14 saves, Matthews broke the deadlock with his third goal in as many games. Matthews set up shop in front of the net and neatly deflected TJ Brodie's point shot into the top corner for his 10th goal of the season at 7:48 of the second period.

Bunting doubled the Toronto lead just past the midway point of the period. Jake Muzzin's breakout pass sent the forwards off to the races for an odd-man rush that ended with Mitch Marner sending a cross-ice pass that Bunting converted at 11:03 of the middle frame for his sixth goal of the season.

Then, Kerfoot's tally 13 seconds into the third period extended the Toronto lead. Nylander intercepted a poorly timed defensive-zone cross-ice pass and fed Kerfoot at the doorstep, and he quickly tucked home his fourth goal of the season.

Lindholm's second goal of the season gave the Ducks a much-needed shot of energy at 7:26 of the third period. Lindholm, despite being a defenseman, was at the front of the net when Ryan Getzlaf fired a shot on goal. Lindholm converted a rebound chance.

However, any comeback hopes were dashed when Nylander collected an empty-net goal, his ninth tally of the season, with 3:07 left on the clock. Simmonds added another goal 15 seconds later to round out the scoring, his third goal of the campaign.